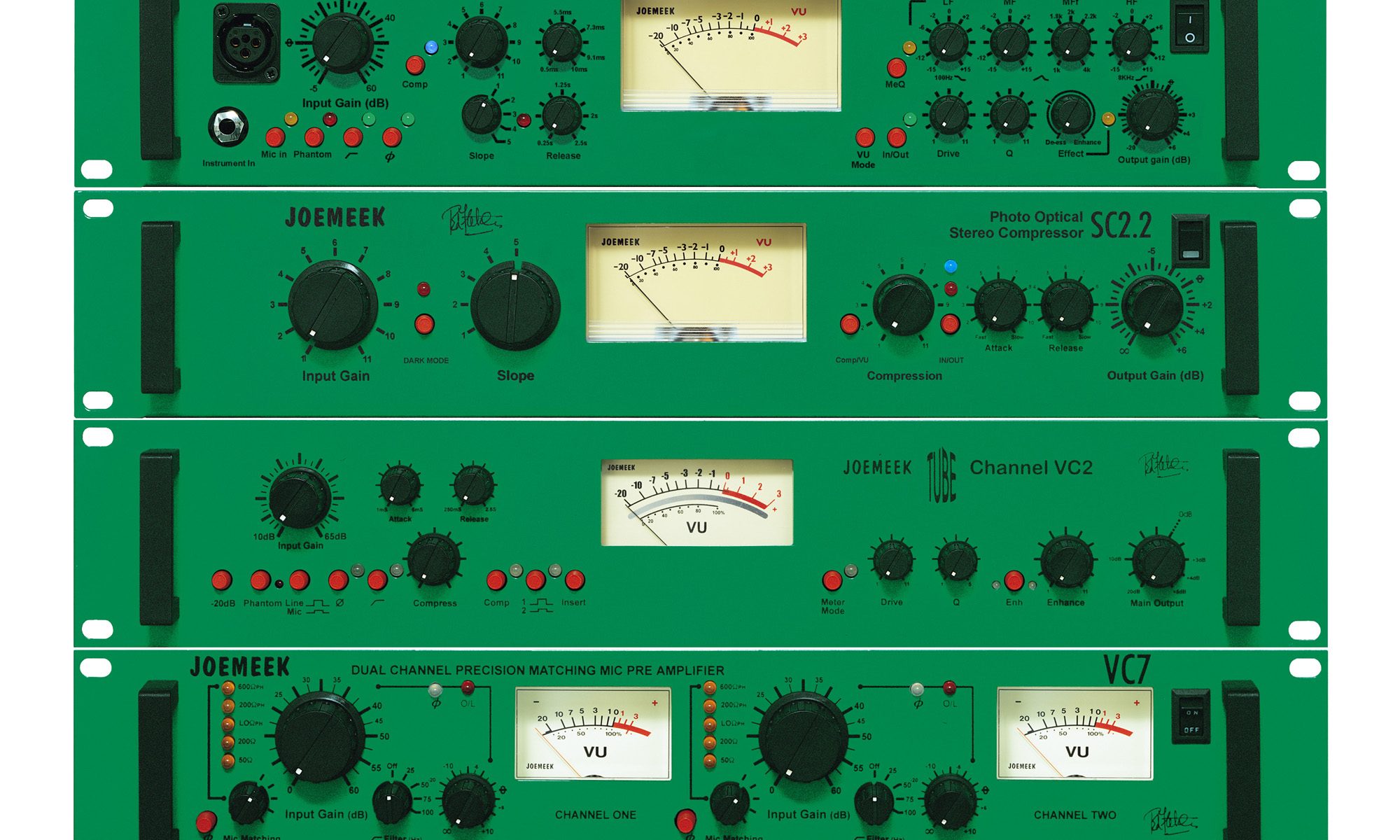 In my early days, I worked with my father, designing and building professional studio equipment. The JOEMEEK range flourished from the initial success of the SC2 optical compressor. This initially ‘garage born’ device started the brand. Here is a trip down JOEMEEK memory lane:

The design was originally based on my father’s work with the recording studio legend Joe Meek in the 1960s. This incredibly simple analogue compressor used photosensitive cells and (then) modern LEDs as a light source to alter their conductivity. The resulting unit would apply dynamic range compression to audio in a way that was perfect for the 90s ‘wall of sound’ mix trend of the day. The inputs and outputs had LOTS of overload capability, and the unit was made out of unnecessarily thick and heavy steel. It looked and sounded just about ‘right’.

Why green? – The JOEMEEK brand became instantly recognised because of its bright green colour. This was a kind of happy accident as it was the colour of the prototypes. These were sprayed using a tone called ‘British Leyland Jade’ which happened to be in plentiful supply in tins at a local car parts shop. Once seen, there was no going back – green it was!

Another sub trait was the over-bright blue LED on the front panel. This I remember costing a ridiculous £17 per light back in the day as the blue LED had only recently been invented.

Only a few months after the SC2 compressor started to gain recognition, we started work on making a new device. The JOEMEEK VC1 ‘Voice Channel’ was a transformer-coupled microphone preamplifier that included a mono JOEMEEK compressor similar in design to the SC2, and an exciter/enhancer device that used distortion and filtering to ‘ess’ sound; particularly useful for voice production.

Lesson learned: “Make products you need”. The VC1 was an example of a product that grew out of necessity. During this period, we were doing recordings of local bands and some live sound work. The VC1 was a unit that we genuinely needed – a portable device that could be used to phantom power a professional microphone and get a really good signal when live or in the studio.

The business at this time moved into a local office (and out of the garage), and production of the VC1 could start properly. It was a fiendishly difficult unit to assemble as it was a compact device that also had layers of shielding to isolate the power supply from the sensitive mic preamplifier circuits. The business grew in a very British way and steadily over the next few years, the whole JOEMEEK range was developed.

The VC1 was a product that initially we wanted, but with the growth of digital recording, everyone wanted. Its complexity to build was a barrier, so we worked on making a smaller and more compact unit that performed a similar function…

If anyone asks ‘what was the best product’ of the whole JOEMEEK family, the answer for me without hesitation is the VC3Q. The unit was incredibly versatile. Functionally similar to the VC1, the VC3Q featured a mic preamplifier, optical compressor and equaliser (instead of exciter). This made the unit more versatile for instruments and less voice focused. It used an external power supply which made it easy to approve and sell in multiple countries. It also means that the construction could be simple. It provided proper 48V phantom power and fitted in a neat 1U, half-rack space. The circuitry was more sophisticated, being reduced to a single board, with a simple 2-part steel box construction. Beautiful.

Did it sound as sweet as a VC1? No (The VC1 Brick was probably the best sounding JOEMEEK unit of all). Was the compressor as good as the SC2? No. But, the VC3Q was miles better than any semi-pro mixing desk channel, had fantastic overload capability, was versatile, easy to make, and low cost. The VC3Q was designed to be mass-produced, and from unit number 1 was made in an outsourced factory in China. The VC3Q was a hugely successful product. No other unit came close in terms of overall product perfection in terms of usability and dependability in my view.

Going into the next century, the JOEMEEK range had grown and had become more sophisticated, reliable, ‘better’. However, truth be told, this did not make better sounds. Eventually, we would learn that it was the limitations and problems with the early units that made them so magnificent in use, and probably why they command such high prices on the second-hand market today? The company changed hands and I moved on to other things, having learned so many valuable lessons so early on. The JOEMEEK was the start of my professional audio career. I remember it fondly.

The Brick 2 shown above is a modern take on the original JOEMEEK VC1 – a portable all in one front end. Hand built, with circuitry that reproduces the original and beautiful sound of the JOEMEEK  unit, but with more range/capability and modern versatility. For use with modern recording systems, it’s simply magic.