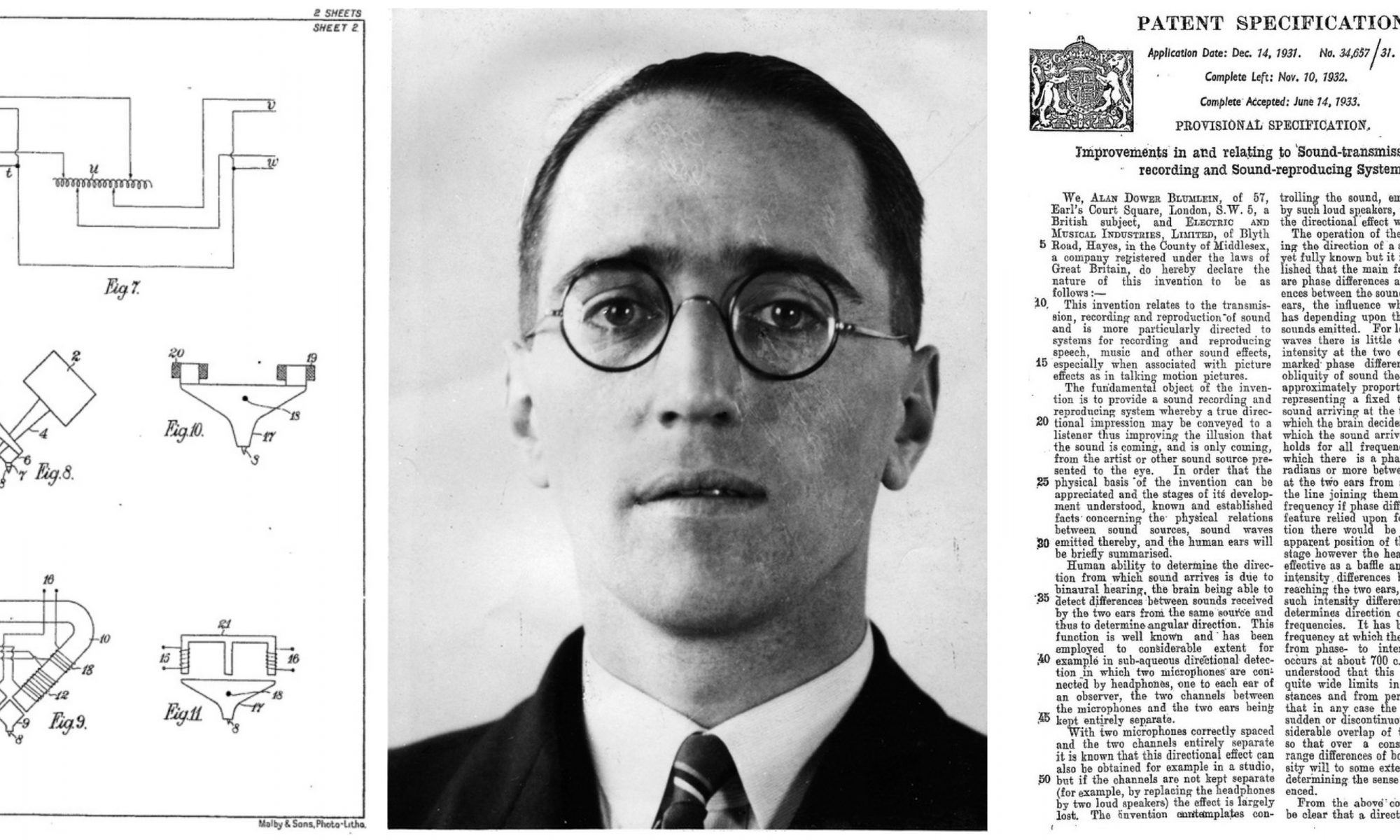 The year was 1993. I was 17 years old, and helping my father prepare for a recording we were to do on location of a choir. At the time I recall we had some of the first available low cost large condenser microphones available, and one of these had a pattern switch that allowed cardioid, figure 8 and omni directional recording. In my own work recording bands, I’d only ever used the cardioid setting, and didn’t give a thought to the ‘figure 8’ option.

I was surprised when we set up our rig to test at home, and Ted (my father) reached for this ‘figure-8’ microphone and turned it sideways. This was as well as another microphone (of a different type) located below it, facing forwards. I couldn’t work out what I was looking at. In response to my questions, Ted replied, “That… is a Blumlein pair”.

That was my first encounter of many with the originator and inventor of Stereo… “Alan Dower Blumlein”. It took some explaining on his part, but after a few minutes, I got the gist of the theory. One mic to capture the whole; the other to capture the difference, thereby capturing perfect stereo at a single place, free from phase/time problems associated with distant microphones.

After the recording, our 2 track reel-reel machine had captured the raw output of the microphones. Left channel for the ‘main’ and right channel for the ‘figure 8’. After a bit of rewiring of the mixing desk, we made a converter to turn the recording into traditional left and right channels. The result was magical. The sound was beautifully real and consistent, and furthermore, the amount of ‘space’ in the sound could be adjusted by changing the gain of the side (right) channel. That recording and my subsequent experiments resulted in the invention of Airsound. The point is, that this had all been thought of, and done before, in a world of pre-war, black and white.

Years later, I would take the time to read patent (GB 394,325) and be mesmerised by the depth of thought and instinctive understanding Alan Dower Blumlein (ADB) shows us in what it means to hear space in sound. It seemed to me with modern eyes, technology and at least 10 years of developing spatial sound, that the ideas in the patent really were the start of things that nearly 100 years later we really had barely begun to explore. If perfect stereo sound reproduction was a 1500m race, his work pushed the World from the first metre to about the 1Km mark. Since then, the World has moved another 50 metres or so. I am not really talking about the technological advancements in his work (although these were the most financially beneficial for EMI), rather the understanding of the fundamental principles of what stereo IS, and how to reproduce it.

ADB didn’t have reliable recording systems, or efficient amplifiers, or high-performance speakers. If he had, then he needn’t have spent so much time creating the technology to explore his ideas. The limitations of the day clearly held him back.

Given the benefit of his original understanding, and modern technology, I have been able to piece together an understanding of my own which has enabled a more nuanced Airsound – Orbitsound’s single point source stereo reproduction system, that owes so much to his intuitive theories of those early days.

ADB’s passing was a tragedy. During the formative period of radar development, he found himself with a number of engineers on a plane that crashed, claiming all their lives. I’d like to think that if he had time to return to his work, that the World by now would be using systems like Airsound. My own feeling tells me that it is where he might have taken his ideas.. it seems like he was heading in that direction.

So, I want to say a heartfelt thank you to ADB. Your work was and continues to be a true inspiration to me. I hope one day that the World of sound thinks as you did.

See www.alanblumlein.com for more information on ADB. The site is run by ADB’s grandson, also named Alan Blumlein, who I have met on several occasions, and I would like to thank for his support of the work I have done in his Grandfather’s footsteps.