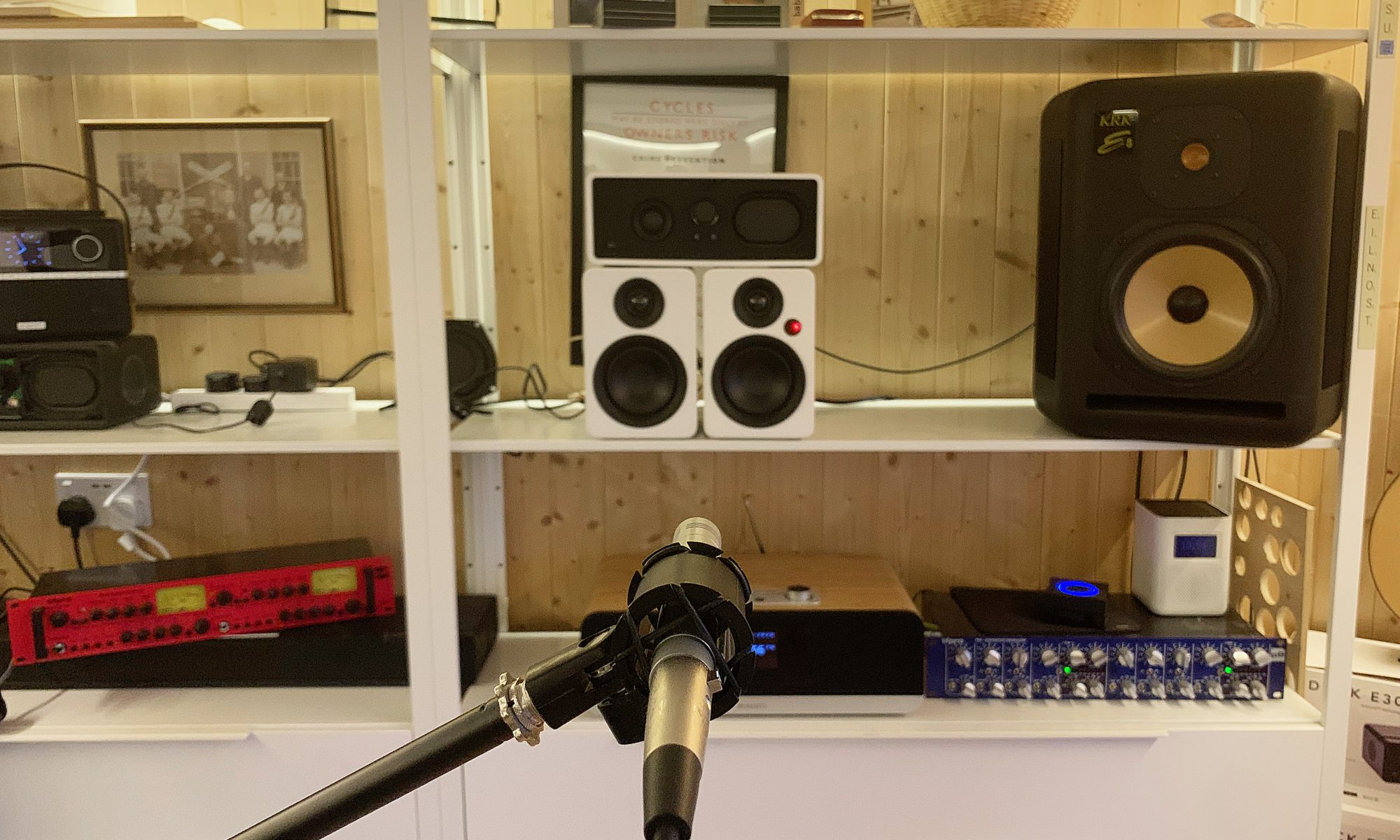 Hear an Airsound system and you immediately know that it plays stereo better than left/right speakers. If it’s so obvious in practice, why prove it? Actually, how do you prove it? It turns out to be a tricky one to capture objectively. Here is my experiment which compares the systems’ abilities at producing stereo.

The question we are addressing is – show that Airsound delivers better stereo than 2 speakers close together (as is the normal solution for one-box stereos).

This is one of those questions often found in audio that sounds trivial to answer, but turns out to be subtly complex.

We hear ‘stereo’ as we hear differences between our ears and interpret those differences as spatial cues in our brains which affects the image of what we hear. How can we measure this? Directly, I think we cannot. My approach instead is to measure how good a loudspeaker system is at reproducing audio signals that contain stereo information. The question of how effective the system stereo image is I will leave for psychologists, but I believe it’s a safe assumption that if a system can reproduce stereo content across all frequencies evenly, it’s a good system for reproducing the stereo effect in general. We are looking for a loudspeaker that produces a ‘flat’ spectrum of content with stereo information in it and to many listening positions (so more than one person can enjoy it). My definition of a ‘good’ one-box audio system is one that reproduces stereo content to at least a 120degree arc in front of the unit (60degrees each way from centre). That makes it useful in everyday life.

My experiment will compare 2 good quality systems – an Airsound speaker (Orbitsound DOCK E30) and a pair of reference HiFi speakers placed in a similar footprint.

Measuring how flat a response of a speaker system is simple. Measuring the flatness of a ‘stereo’ signal is harder. The test signal in my test is a swept sine wave, where the microphone records the peak level at all frequencies. With a small DSP program, I converted this mono sine wave into a 2 channel signal which also contains some stereo information in the form of a left-right difference. This ‘stereoness’ also contains a full spectrum of frequencies. 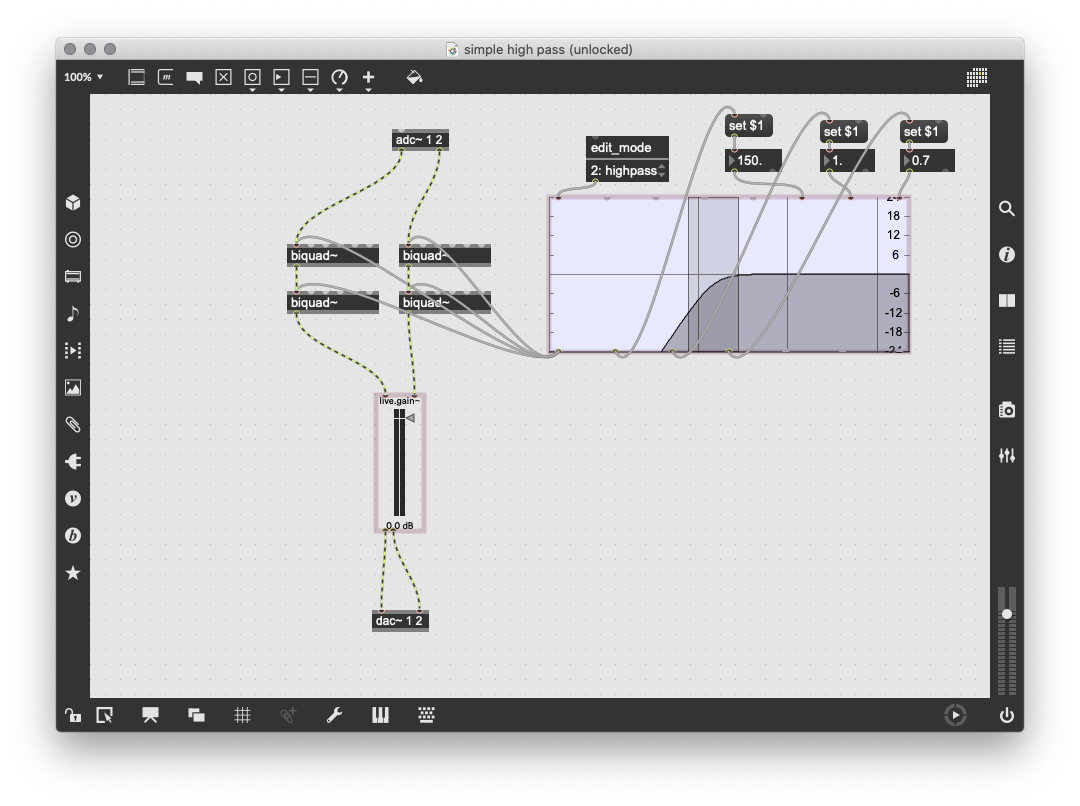 Technical note: The formula / process I used for this experiment was R=-1/2L and HPF of 150Hz. In other words, the right channel was derived from the left channel, at half volume and phase reversed. (I experimented with different levels of multiplier, but the results were not affected, -6dB (x0.5) seemed to strike the right balance. The resulting signal has a discrete right and left channel. And, looking at either channel, we would expect to see all frequencies represented that are in the other. It is a signal that contains similar information in left, right, sum and difference. Note, the high pass filter was introduced to remove any non stereo content from the experiment in case it skewed the results.

This stereo signal would be fed to each test speaker system in turn, and the performance would be evaluated at a number of listening positions at 1m distance. The measurement microphone would be moved to different listening positions from on-axis to 60 degrees off-axis. Note: both systems are symmetrical, so only one side would be measured. 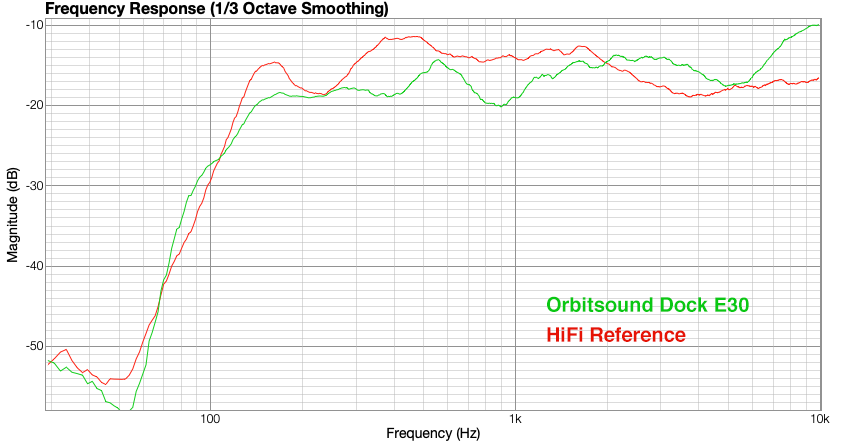 Both systems were calibrated to 90dBA @1m. The resulting mono frequency plot shows that both systems perform well from the measured 150Hz to 10KHz. Both audio systems show a good linear response that only high-quality audio systems can produce. 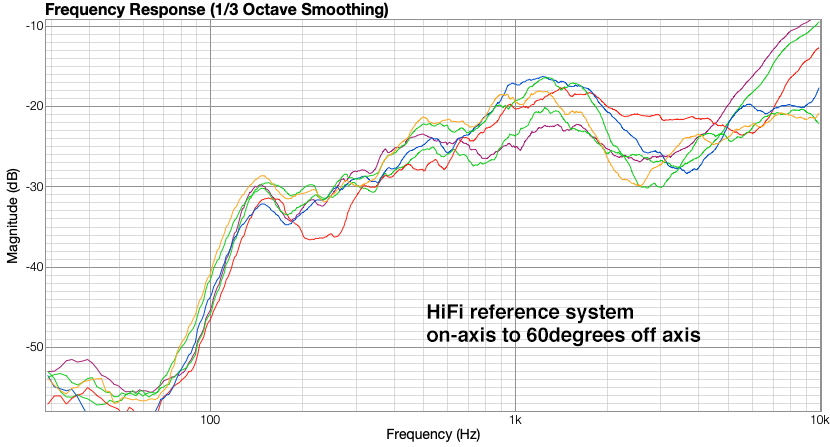 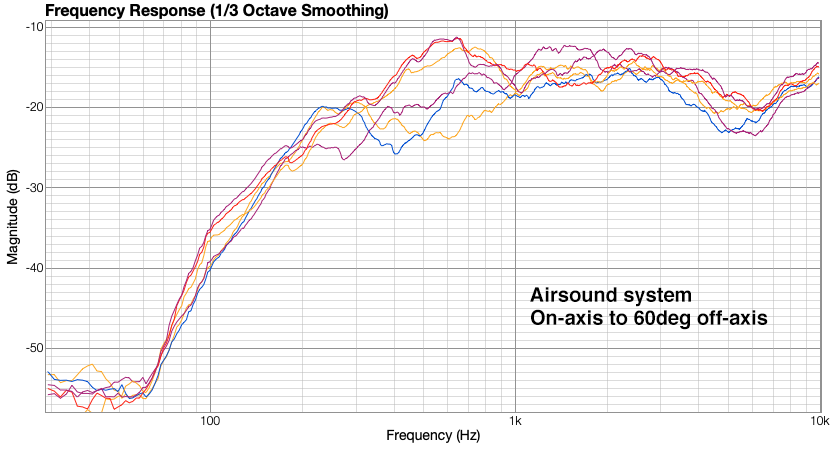 The plots above show the registered frequency response of the stereo signal at angles from on axis to 60 degrees. The Airsound system is clearly more consistent with listening angle than the stereo system. There is considerably less variation between the plots at higher frequencies.

Comparing the measurements of stereo with the baseline result (overlaid) we can see that in all cases the stereo system colours the sound to all listening locations. The Airsound system produces audio that is consistent with the baseline measurement, and since we know that all measurements have equal content of all frequencies at source, we know that the 2 channel stereo system is colouring the sound considerably more than Airsound.

This data shows that Airsound is a better choice of audio system than left/right discrete channels for a single box audio system for 2 reasons:

The sound is shown to be considerably more consistent in different listening positions.

The stereo sound produced in all cases is truer from the Airsound system, with the baseline showing to be much closer to the recorded audio.

End note: My feeling is that people take 2 speaker stereo as the ‘only’ way to reproduce stereo. Stereo’s inventor, Alan Blumlein said that ‘you can replace earphones with a pair of loudspeakers, but the stereo effect is largely lost’. What he realised back in 1936 is that placing 2 loudspeakers in free air, producing similar sounds, in a similar plane unleashes interaction which distort and affect the stereo image – plus the fact that the system cannot influence your ears independently which is the concept upon which it is built. Airsound isn’t a perfect system, but it is a huge step forwards in being able to reproduce stereo without this problematic conflict and lack of dependence on the impossible.